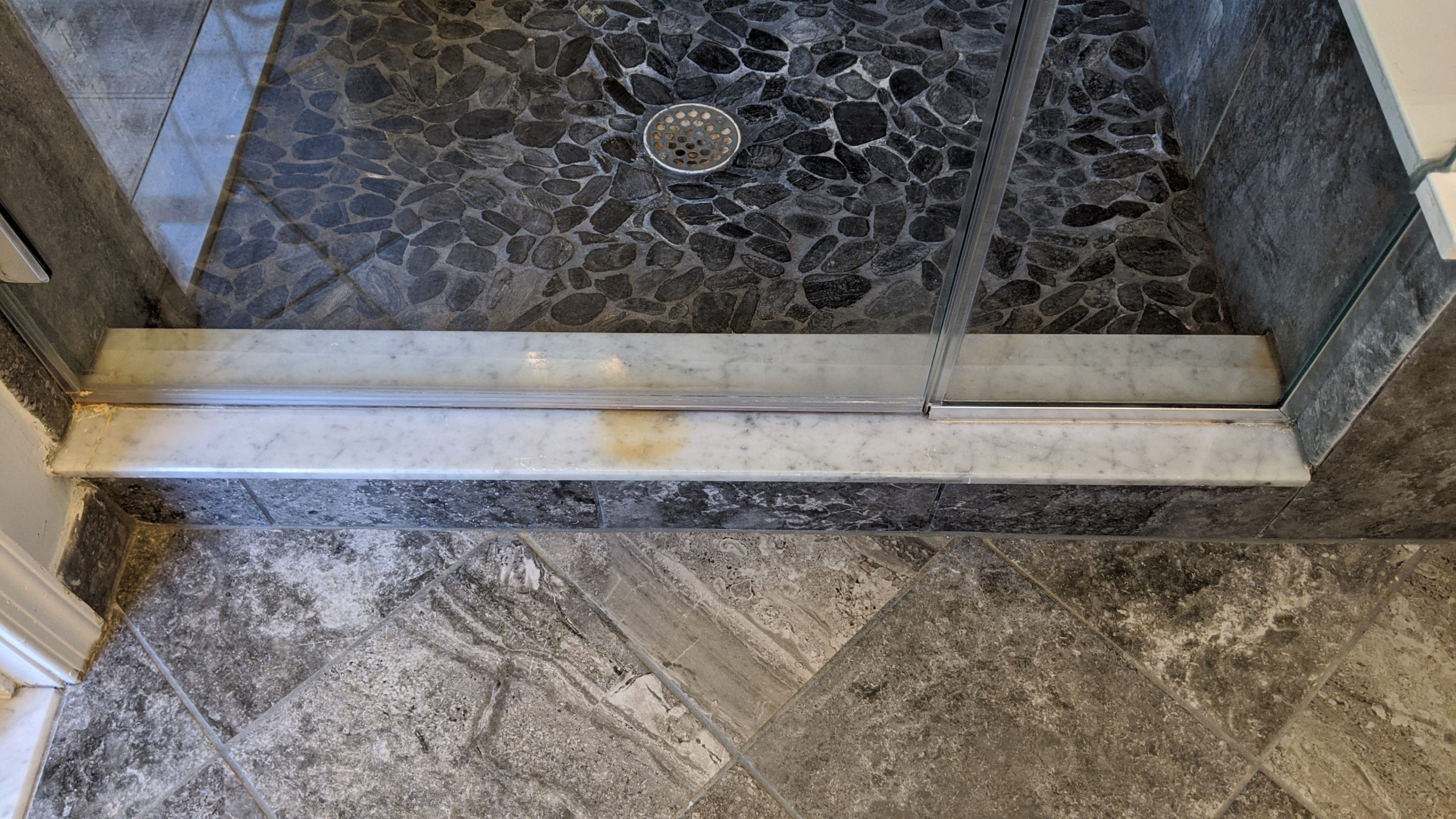 Shower doors have many advantages over shower curtains. They add beauty and style to your bathroom. Most importantly you don’t have to fight with it like you do with a shower curtain. The shower doors’ superiority however doesn’t come without drawbacks. You may think squeegeeing the glass is a nuisance, but at its worst, a shower door can leak.

A shower door isn’t meant to be replaced like you would a shower curtain. Unless you can print your own money, it doesn’t make financial sense to replace a shower door every five years. Preserving its beauty requires a bit of manual labor such as squeegeeing it every time after you shower. This however is a small price to pay to keep it looking new. Protective glass coatings such as Diamon-Fusion and ShowerGuard drastically reduce maintenance, but they don’t make your door maintenance free. Maintenance aside, what if you have water pooling outside your shower? How can you pinpoint it? More importantly, how to do you fix it?

A leaky shower door can be a simple fix or may require a complete overhaul. The reason why your shower door leaks will depend on what type you have.

Why does a framed or semi-frameless swing shower door leak?

Framed and Semi-frameless shower doors are usually quite water tight and may only start to leak as they age. If you have a leak on a newly installed door, this may be due to a poor caulking job. To cut cost, the shower door installation company may opt to not install fillers where they might be needed.

The person measuring the shower door will determine if fillers are required by using a spirit level. A level will help determine if the walls are plumb and if the curb is level. When the curb is level, it means that it sits perfectly horizontally. For walls to be plumb, they need to be perfectly vertical. A filler should be used if the curb is out of level more than a 1/4″. Normally walls that are out of plumb less than 5/16″ don’t need a filler because there is room inside the channel for glass adjustments. This is not the case for the curb.

To function properly, a shower door must be level and plumb. If the curb isn’t level, the installer must begin by shimming and leveling the shower door threshold. The more he has to shim, the more silicone he will need to fill the gap and thus we have our first problem. Silicone may settle a bit depending on the gap size and air bubbles may form as it dries. Fortunately this is an easy fix. Give the shower door time to dry if you used it recently and silicone where the water is escaping.

If you look closely at the inside of a threshold, you’ll notice what’s called weep holes. These holes are drilled on the track because the manufacturer knows that water will collect inside of it. Though the weep holes do a decent job of letting the water out, some water will remain inside. If the installer didn’t properly seal the corners inside of the threshold where it touches the walls, then water will slowly make its way through the wall and behind the tile. This problem is actually quite common. The first thing you’ll notice is discoloration on the bottom corners and eventually the tile may become loose.

Unfortunately there is only one fix for this problem. The first step is to completely remove the shower door and thoroughly clean the threshold and channels. The silicone that remains on the walls has to be cleaned as well. An old threshold will have quite a bit of soap scum, mineral buildup, and even mold inside of it. Most shower door companies might just simply tell you that you need a new door.

Why does a frameless shower door leak?

How the shower curb was installed is usually to blame for frameless shower door leaks. Curbs, also know as saddles need to be pitched towards the inside of the shower. Inexperienced bathroom remodelers will sometimes level them or worse, pitch them the wrong way. This is not a problem for framed doors because the threshold also acts as a dam.

A frameless door has a sweep underneath it, but that’s not enough. To solve this problem, a threshold must be installed under the door. There are a few options, and usually they will consist of what’s called a half round thresholds. Half rounds come in different finishes as well as clear acrylic if you want it to be less noticeable.

Prefab shower pans and tubs can also be the reason why a frameless shower door leaks. Prefab units usually have a very narrow curb and you’ll have a similar situation to the wrongly pitched curb. Installing a threshold under the door will remedy the leak.

Most shower door leaks happen because the installer may have missed an area when caulking. Years of cleaning can also be to blame as it slowly wears out the silicone, especially if you use abrasive cleaners and sponges. Clean as much old silicone as possible and re-caulk. This will usually take care of the problem. Before you silicone it, make sure that the area is thoroughly dry.

Do you have a different type of leak? Let us know.

What is the Best Sliding Shower Door?

How to Choose the Perfect Shower Door

We are a husband and wife team with extensive experience in bathroom remodeling, custom tile work, and frameless shower enclosures. This blog is a means for us to express our thoughts, ideas, and experiences. We hope you enjoy reading our posts as much as we enjoy writing them.